But is it? Does it have to be? How you feel about the “Godfather of Soul’s” declaration can tell you a lot about yourself. Often where you stand on this issue is a function of where you sit.

As a women’s health provider, I have a front row view of just how deeply the wellbeing of the women I see is linked to the men those women are connected to. Most women’s health and lives are greatly shaped by the men that are in theirs, romantically or otherwise.

The effects I see these relationships have on women’s health are not clinical diagnoses per se. I am not talking about hypertension, diabetes or liver disease. Rather, I am talking about intimate partner violence, sexual assault, unplanned pregnancy, HIV and issues like these that effectively control women’s lives’ chances – issues that are moderated by the state and status of men, and the position of the women related to them.

To paraphrase George Orwell, we are all equal, but some of us are more equal than others.

Inequality takes root around a host of characteristics, but sex seems to be the most pervasive difference around which it manifests. That this social inequality based on sex happens in a systemic, institutionalized way is what I define as patriarchy. Simply, patriarchy is a world view and way of being that says that all things related to being male are important, and that everyone and everything else on the planet has to assume a place of subservience to the interests of men, in particular the group of men in power.

Most importantly, this definition works whether the practitioners of patriarchy are male or female. Just as people of color can participate in racist systems that oppress others who look like them while personally feeling manumitted from such tyranny, females can participate in and support systems that oppress women categorically, even if they personally aren’t limited by those systems.

In patriarchy, biology is not the problem. The line of logic that makes this clear is important in understanding other forms or systemic oppression as well. Just as being born male does not make one a patriarch, being born White doesn’t make one racist, being straight doesn’t make one a homophobe, and being Christian doesn’t make one an Islamophobe. However, participating in such systems that advantage you on the basis of any one of these identities makes you guilty of, or complicit in, the oppression that secures that advantage. We’ve seen this dynamic play out primarily in the context of men controlling women’s lives and their resources since antiquity. The result is that masculinity and patriarchy are so intimately associated that many, if not most people often struggle to differentiate between them, and have little cause to make a distinction between the two.

Why is it important to make that distinction? Well, I can think of a couple of reasons.

·       First, masculinity should not be defined by patriarchal tradition any more that femininity should be. If men are born patriarchs and not made into them, then we should simply cease striving for a different world and accept things as they are with regard to male dominance and control. There might be innate differences in the capacities of males and females – I simply don’t believe that power-based dominance has to be one of them.

·       Second, I believe that a strategy to banish patriarchy has to include the ability to make the case that it, patriarchy, is a system that harms men as well. It costs us something. It costs us men emotionally, psychically, economically. By depriving women of their full humanity, we forego the full ingenuity of human creativity and endeavor. That costs us all. How much? Consider the following: if women make up 51% of the world’s population but men have 100% the power and opportunity, we are trying to solve 100% of the world’s problems with 49% of the world’s brain power. That is poor resource utilization. I think that we can do better than that.

Women who can’t participate in the economy leave men saddled with a responsibility of primary breadwinner in an economy that increasingly requires more money for bread. The hyper-masculinity required by patriarchy creates homicidal tendencies in men not only towards women, but towards each other. Patriarchal tolls show up in men’s lives unrecognized because they are often named as just part of being a man.

If we cannot make the case that men with rational, healthy self-interest can and should divest of and battle patriarchy, then I’m doubtful that we can ever do better than chivalry. Chivalry does not dismantle patriarchy. It can only hope to lead to a more polite, benevolent form of it. Benevolent patriarchy leads men to open doors, be complimentary, and for some individuals, never think of hitting or raping a woman – but it does nothing to deconstruct the gendered hierarchal relationship created by patriarchy as an institution, and that is what we need, in a revolutionary way.

I feel the pain of patriarchy, as a man.

I feel the pain of being suspect to women because all they know from men is misogyny, objectification, and subordination, and they can’t be too sure that I am any different.

I feel a loss from the inability to have intimate relationships with men because homophobia is so rampant that when people hear the term intimate they think “sexual” and men refuse to bond in mutually nurturing connections out of fear of being misclassified as “gay.”

As a man in general, but as a Black man in particular, I live with a heightened awareness around conflict because of the fratricidal possibilities that exist in a society that has militarized its citizenry and police by cultivating a gun culture and racializing and gendering crime.

All of these antagonisms are directly related to patriarchy and are, in my mind, unnecessary sufferings. They, like patriarchy, don’t have to be. How does the saying go? “What we don't know won’t hurt us.” But what we as men are failing to recognize about patriarchy is that it’s killing us.

As I close, I will leave you with a few questions – because I find them more interesting than answers.

·       How would your world be different without patriarchy? 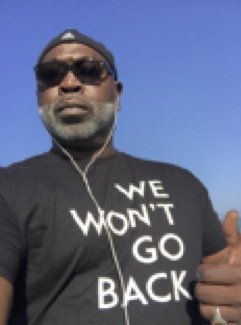 We are now faced with the fact, my friends, that tomorrow is today. We are confronted with the fierce urgency of now. In this unfolding conundrum of life and history, there is such a thing as being too late…We must move past indecision to action...If we do not act, we shall surely be dragged down the long, dark, and shameful corridors of time reserved for those who possess power without compassion, might without morality, and strength without sight.
-Dr. Martin Luther King Jr. in his “Beyond Vietnam: A Time to Break Silence” speech, delivered April 4, 1967, at the Riverside Church in New York City

Welcome to my blog. That you are here means that you are listening, a privilege that creates for me the responsibility to have something meaningful to say. Fortunately, I think that the opening quote by Dr. King says it best (as you follow me, or if you have heard me speak or read my interviews, you will find that there are lots of things that I think he said best!). Every day as we watch the news we are confronted with the fierce urgency of now. It is clear that we are at a moment in our country and world’s history where we can't afford to be passive, and in the words of Dr. King, we must move past indecision to action.

We are now living in an era where it is incumbent upon us not only to stay true to our values, but to take a stand. This blog will be a continuation of what I started with my book Life’s Work: my personal stand against patriarchy, denial of reproductive rights, Islamophobia, anti-immigration, racism, poverty stigma and more, and for the forces of good will, human rights, and social and reproductive justice.

This blog will be my effort to respond to the fierce urgency of now and generate light, not heat, on the big issues of our day. What do I mean, distinguishing between light and heat? Light is productive and stimulates growth, while heat can be destructive. As I often tell anti-abortion individuals outside the clinics where I work, I value dialogue and am willing to engage in an exchange of ideas, but if I get the sense that someone is wanting to talk at me versus with me and that they’re not open to honest disagreement, then I won’t pursue that conversation. That’s light vs. heat.

I want this forum to challenge or empower you to step into what this present moment calls for: action. I will discuss issues that regard the lives of women, focusing primarily but not solely on the issue of reproduction. I speak plurally because as Audre Lorde said, “there is no such thing as a single-issue struggle because we do not live single-issue lives.” The issues and the forces at play are multiple, and these not only determine the life chances of women directly, they impact all of us—even if indirectly.

So, welcome to my public thought space, where perhaps together we can explore the big questions of the day to figure out which way to go as we answer the call of Dr. King to move past indecision and take a stand for power with compassion, might with morality and strength with sight now, before it’s too late.

I want to hear from you. How are you generating light? What's your first move towards action?